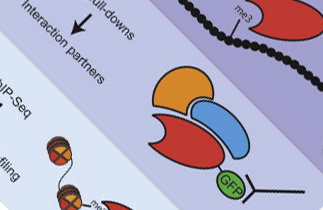 Michiel Vermeulen (Utrecht University) and his Dutch and German colleagues have applied quantitative mass spectrometry-based proteomics and ChIP-sequencing technology to discover and functionally characterise proteins that bind to methylated histone tails. The results have been published in Cell on 17 September 2010.

In a eukaryotic nucleus, DNA is packed in the form of chromatin. The nucleosome forms the fundamental repeating unit of chromatin and consists of two copies of each of the four core surrounding histones H2A, H2B, H3 and H4. Post-translational modifications of core histones, such as lysine acetylation and methylation, play an active role in regulating processes such as transcription, replication and DNA repair. Some of these modifications serve as binding scaffolds for regulatory proteins that can subsequently exert their function at the site of recruitment.

Vermeulen and his colleagues applied quantitative mass spectrometry-based proteomics to identify a large number of novel chromatin “readers” that interact with methylated histone tails. The authors then applied GFP-tag based protein affinity purifications, ChIP-sequencing and conventional protein biochemistry to further validate and functionally characterise their findings. By and large, the known biology of the lysine methylation sites they studied is reflected by their readers, indicating that reader complexes at least partially determine the biological function of the methylation sites they bind to.

In 2009, Michiel Vermeulen received an NWO VIDI grant and a KWF project grant for his research.