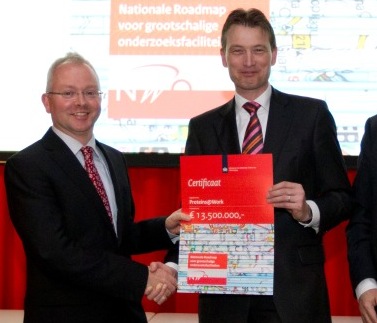 A programme coordinated by Albert Heck, scientific director of the Netherlands Proteomics Centre, has received financing from NWO to set up a large-scale research facility. The project ‘Proteins@Work’, in which various Dutch research institutes collaborate, receives 13,5 million euro. This was announced by State Secretary Zijlstra of OCW and Jos Engelen, chairman of NWO, this afternoon in Utrecht. The participating partners will make state-of-the-art technology, equipment and expertise in the field of the life sciences available to other researchers in the Netherlands.

In total, five programmes in the Netherlands receive financing from NWO within the National Road Map for Large-scale Research Facilities, for which 80 million euro was made available.

The Proteins@Work-facility will make high-level technology, equipment and expertise for studying proteins in cells and tissues available to the biological and biomedical researchers in the Netherlands. The facility is of great benefit to Dutch Life Sciences and, in particular, will aid in the prevention and diagnosis of disease. “We work with everybody who wants to understand how proteins work, for example how proteins can cause disease, but also how stem cells can develop into healthy organs”, says Albert Heck, the initiator of Proteins@Work. “Proteins are the essential workhorses in cells and to understand life, we need to know how proteins work together.” The Proteins@Work programme is a collaboration between Utrecht University, the UMC Utrecht, the Hubrecht Institute, the Erasmus MC Rotterdam and the Netherlands Cancer Institute and builds upon the Netherlands Proteomics Centre and the European large-scale proteomics facility, PRIME-XS.