Exposing subtle variations in the make-up of viruses 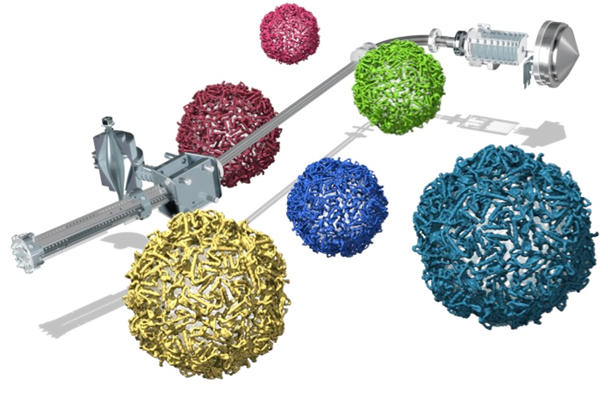 13 May Exposing subtle variations in the make-up of viruses

Posted at 08:13h in News by Martje Ebberink 0 Comments
0 Likes

In a recent article in the Journal of the American Chemical Society researchers from the Biomolecular Mass Spectrometry and Proteomics Group of Albert Heck at Utrecht University report on improvements made on a mass analyzer (termed Orbitrap), enabling them to analyze virus particles with unprecedented precision. This allowed them to simultaneously detect and analyze multiple co-occurring virus particles with very subtle mass differences between them.

The researchers used the instrument to determine the amount of foreign protein cargo in virus-like nanocontainers. In addition, they uncovered for the first time the composition of the Adeno-Associated Virus capsid, which is the first approved vector for gene therapy in the Western world. Their experiments revealed an assortment of different capsids with small variations in the number of different capsid proteins.

Virus particles can be considered as very stable capsules holding and protecting the viral genome. These capsules can also be utilized to deliver foreign cargo in for instance gene therapy or nanotechnology. Virus particles are largely built from proteins and are some of the largest known protein complexes. Up to several hundreds of copies of the capsid proteins assemble into a tightly packed and often highly symmetric hollow shell. Determining a detailed composition of a virus particle is challenging due to the large size of the shell, requiring special instrumentation that can detect and mass analyze these massive molecules.

The work was performed in collaboration with the groups of Mavis Agbandje-McKenna (University of Florida, USA) and Alexander Makarov (Thermo Fisher Scientific, Bremen and Utrecht University).